The village community as a support for the individual

In order to make all these gods peaceful in the long run and to appease ghosts and demons, a well-functioning village community is necessary. At the same time, the village structure shows the all-round context again: everyone in the community is prepared to help prepare the festivals and ceremonies. Everyone is a part of the whole – without the individual, the community would not be complete. But this also means that besides the daily work, there is almost always some sort of celebration. The life of the village community is thus determined by a rhythm of celebration – which the former is definitely superior to the working rhythm.

For order, adat, a kind of right from pre-Hindu times, is particularly important. It determines the behaviour, rights and responsibilities within the village and the family as part of the community and the individual as part of the family. 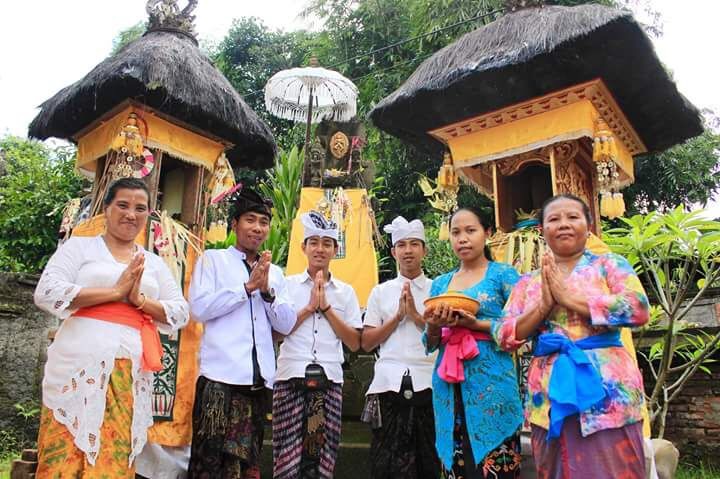 Banjar – Rules for living together

Organization is everything, and so a village can consist of several communities (banjar) which regulate the life of the inhabitants independently of each other. Even Denpasar – divided into innumerable banjars – becomes the village again. Membership in a banjar is a rewarding experience for every family. Religious rituals are also part of the tasks supervised by the community of adult married men of all professions and castes. Of course, all other things are also regulated by this union, and in fact, almost everything is regulated in a banjar within the community: from rice cultivation, to the plots of the temples, to organizing the festivals and maintaining a Gamelan orchestra of one’s own. In addition to monitoring law and order, a banjar also organizes personal but money-guzzling ceremonies such as weddings or tooth filings. Houses are built with the help of all, the village is developed and maintained together.

The banjar also advises on the construction of new schools, the purchase of commercial vehicles, manages the harvest and provides for poorer members. Since all this is not in vain, a banjar finances itself by membership fees, admission fees and the sale of the harvest. The members are obliged to attend the monthly meetings, participate in the companies and do physical work. The same time, however, is returned in the form of support. Those who refuse are fortunate if they are only prosecuted with financial penalties. What is much worse is the exclusion from banjar, because this is to be equated with the exclusion from the village community. And so each and every one of us tries to be a part of the whole.

Individual inclinations within the plots can be realized in sekar. These are associations of different people who take care of a task that is often limited in time. Some Balinese decide to dedicate themselves to the temple, while others devote themselves to music or dance and others build a new street. Depending on your talent, profession and inclination. 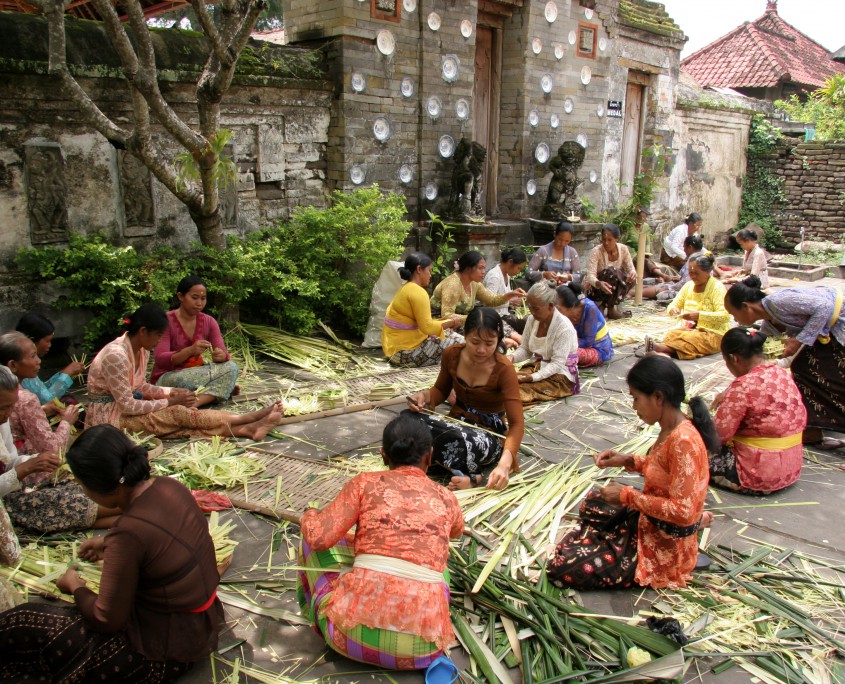 The most important of these sekar is undoubtedly the sekar subak. The most appropriate translation for subak would be rice and irrigation community, because the management of the irrigation and harvesting of the so-called divine plant is subordinate to this union. Membership in a subak is a must for all farmers whose fields border on an irrigation system. A statute guarantees the smooth running of the event, regulates the amount of water to be added to the individual fields and the financial and active contribution of the individual members. Most of the time there are about 200 farmers in a subak, who cultivate up to 100 hectares of land. And they do so by following strict rules, using certain ceremonies and only at fixed convenient times for the individual steps.

For outsiders, the ritual actions that accompany rice cultivation from sowing to harvesting are hardly recognizable. Only the small shrines that can be found in every field allow prudent observers to draw conclusions from a deeper background of sweaty work. These temples, called bedugul, are dedicated to the goddess Dewi Sri. The goddess of rice is the centre of all ceremonies and celebrations surrounding the nutritious biblical occasion. Sacrifices and holy water are brought to her every day to protect the fields and guarantee a good harvest.

After the subak has fixed the date for the new sowing, sacrifices are made in honour of the goddess, which are repeated at regular intervals. As soon as the rice blossoms, they say the goddess is pregnant. The small shrines are decorated with dishes that appeal to pregnant women, and symbolic wedding presents: candy and sourness as well as precious fabrics and fragrant essences. The goddess should finally be satisfied and give birth to a good harvest – and this harvest is only brought in five months later. Enough time for storms and evil spirits to destroy the seeds. Enough time for pests to destroy the ripe fruit just before harvesting. In many villages, trance dances and ceremonies are held to support them, which prevent disaster or invite pests like rats to dance sanghyang, which are supposed to entertain them and distract them from their evil deeds.

If Dewi Sri is graciously tuned, it’s soon time to harvest. Like everything that has to do with rice growing, this is only done on a favourable day. First, however, the rice farmer and his family cut the seeding (nini) for the next harvesting period in a ritual act. It consists of the best corn that the field has produced, and is carried to the village with dignity. The next day, the harvest begins, with men and women alike pouring into the fields, cutting the ears of corn together, bundling them into sheaves and carrying them to the rice stores. Now the harvest festival is being prepared in honour of the rice goddess. In each village, this celebration lasts up to four days and takes place differently. However, Dewi Sri is always paid homage and thanksgiving with offerings, dances and ceremonies. The goddess, like the village farmers, is then ready to prepare the fields for the next rice cultivation in the following days.

Of course, the subak can also handle many mundane tasks. The ingenious irrigation systems have to be maintained, dams, locks and canals have to be built and repaired. Bizarre scarecrows are set up in the fields, pests are driven out by noise and new fields are opened up in the few remaining vacant areas of the island by hard work. The sacrificial shrines and the village temple must also be tied up by the members of the subak. During this work, the landowners can be represented by helpers, e. g. during the harvest. This also gives landless people the opportunity to work for their daily rice and not have to buy it on the market at high prices. After all, rice is not only the basic food of the island, but also a gift from the gods. 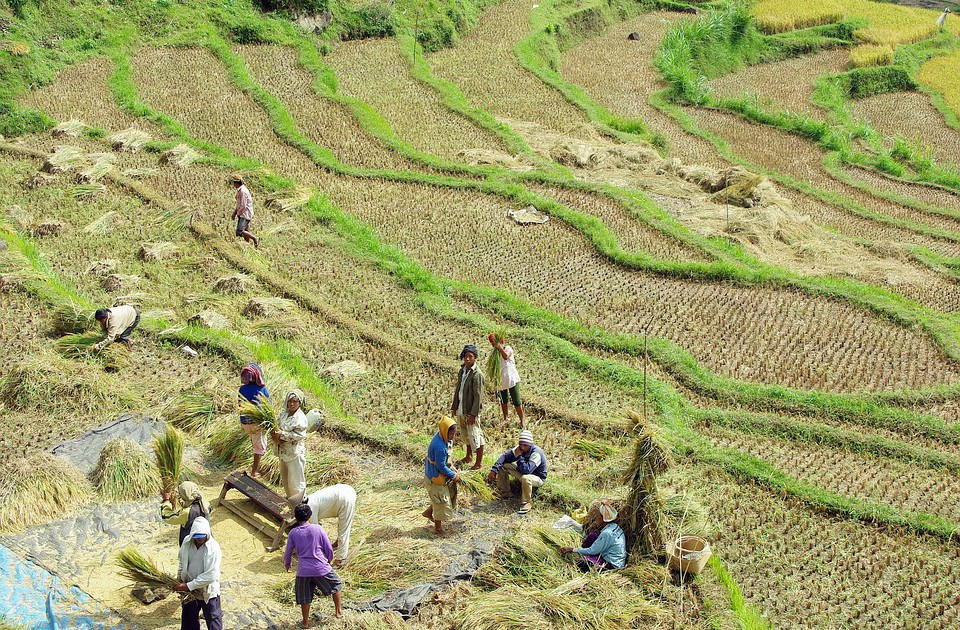 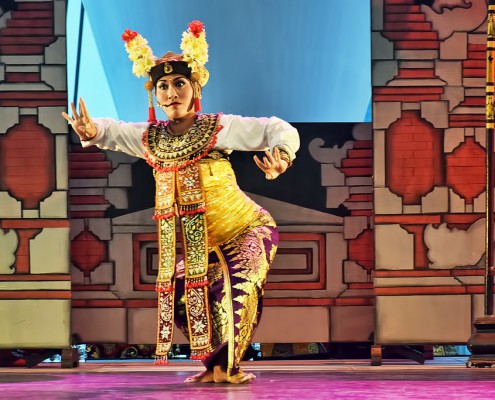